skip to main | skip to sidebar

Lots of New Things Going On!

I know I have been slacking lately on keeping all of our loved ones up to date on our family! I have been so busy lately...I will try not to make too many excuses!

Reese is getting SO big! She is now in her BIG GIRL BED! The whole family went to Sea World and Fiesta Texas a month ago. There were 8 adults and 6 children 6 and under in our group! We sure were tired by the end of that trip. Anyway, while we were there, Reese slept on the pull out couch in our hotel room alone. We told her that if she was good she could get her big girl bed like her friend Megan had. She was very excited and did great! So when we got home Danny converted her crib into her toddler bed. She has never gotten out of it in the middle of the night, (which was my biggest fear) or had any other problems since.

This week has been especially difficult for me because she decided that she does not want me or Danny to take her to bed anymore. We have both made a HUGE effort to always take her to bed together every night since she was a newborn, except if Danny or I were out of town. She announces that she wants to go by herself. She picked up her blanket, gave us hugs and kisses and went off to bed. She closed her door and we watched her in the video monitor just climb into bed and go to sleep. She has been doing this for almost a week. It just breaks my heart to see my baby girl grow up so quickly!

She has also been saying the cutest things lately. The other day, Remme was crying in the car and Reese looks at her and shouts, "You are making my ears fall off!" Also, now when she hears someone say "Hey!" she says, "Hay is for horses!" Too cute! She really has such a cute personality!

Remme is almost 8 months! I can't believe it. It is going by quicker than Reese's first year. She is sitting up really well and this week I caught her on her hands and knees rocking back and forth. I know I should not compare but, Reese didn't start crawling until she was 10 months old. She was very happy with Danny and I bringing her everything! So Remme has really gotten so big in fact she is HUGE! She weighs 20 pounds. She is hugging and starting to give kisses. I will post pictures of them soon!

As for Danny, last month was a record month for him! It was his largest month in sales ever! I am so proud of him. With everything going on in the world today, he is working harder to make sure that his family is cared for.

Today is our 4 year wedding anniversary! We spent the evening hanging out together as a family. Which was phenomenal because I am usually working after he gets home, since I have been playing with the kids all day. We ordered in and read books to Reese and Remme played. Danny and I will go to dinner this weekend together to celebrate by ourselves.
Posted by Karen at 7:27 PM 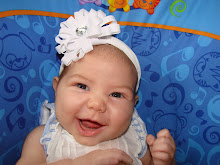 Karen
Richmond, Texas
Danny and I met at a wedding in April 2002. We walked down the isle together as bridesmaid and groomsmen and then 3 years later we walked down the isle together as bride and groom. (April 2005) That December we found out we were expecting our little pumpkin Reese, July 2006 and 2 years and 15 days later came our sweet pea, Remme. (August 2008) We are so blessed to have such a wonderful family and so many friends that bring so much joy into our lives. I hope we can bring some into yours!